mullet on the fly 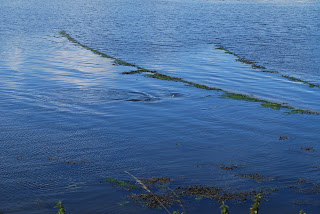 Catching mullet on the fly is quite an angling challenge, not an imposible one, but one that takes a little patience and time. From as early as late March or the first few weeks of April these fish can be seen mooching, swirling and splashing about in our estuaries. As water temperatures rise and the days grow longer into late April so their numbers increase, where they spend their winter months maybe something of a mystery, but I greet them as the first sign of hope after a bleak January and February.

These species are late maturing often as late as nine or ten years, and not only are they late developers but they also seem to possess an ability to spawn in which ever year they choose. Subject to the usual influences like water temperature and availability of food, it is suggested that they do not spawn until at least late April and spawning may continue into late summer. Fish tend to remain in one location over time especially if there is a local 'food supply'. Often to be taken advantage of by the fly angler!

So what are we to do? How do we set about catching this fish? Like many of our approaches to saltwater flyfi 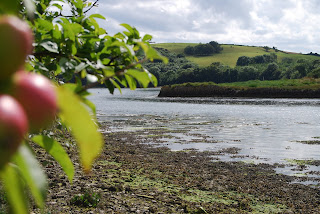 shing in Ireland it helps to find a congregation of fish or rather where at specific times do fish tend to congregate in good numbers. Estuaries, harbours, tidal drainage systems and even the open sea, quite often close to shore hold large numbers of fish. Through simple observation we can judge when might be the best time to tackle our elusive quarry. During the early stages of a rising tide large shoals of mullet will sweep into the estuary moving further inshore with the flow of water. There is an interesting behaviour that you can observe during this time especially where there is a lot of bl 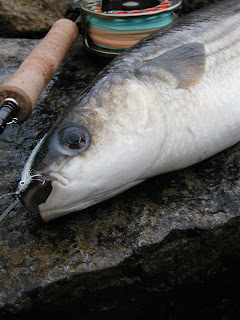 adder wrack. Fish will often swim in less than six inches of water and you can often see their dorsal and tail fins. Its important that you stay out of sight to avoid spooking them, if you do dont worry too much as they will return. With the rising tide fish will often swim under sections of the seaweed with a very much-exaggerated sinuous motion, almost snakelike. I often wonder are they dislodging food particles from the seaweed tentacles? Watch them move from bunch of weed to bunch of weed! Ok so we have found a few fish I here you say but what are they eating? If there is a local supply of food like an ouflow pipe or effluent from a commercial fishery or otherwise mullet will tend to gather at these locals - imitative flies of the food source can catch you some fish no doubt. Bread flies, worm flies, seaweed flies even grayling flies have been cast at this wonderful fish. The latest story I have heard is that in one locality during summer they have a weakness for ice cream cone! Now there's a tying challenge. 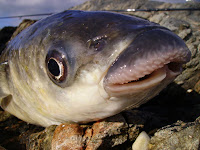 generic 'white fly' of bread type imitation at first then try fishing with more specific patterns. Some of the types that i have caught fish on can be seen here - and its worth remembering that streamer patterns, seatrout patterns and even small bass patterns have also caught me fish. 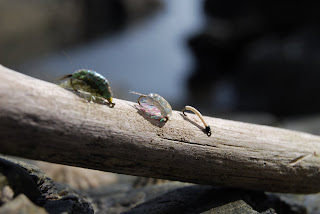