The sun is beating down from directly above your head, the sky is the brightest of blues and the water's as clear as Gordons. Theres only the faintest of breezes cooling the sweat on your back - On the other hand what happens when you are fishing in conditions resembling cold chocolate? The following notes could help your fly and lure fishing under both circumstances.

Dealing with cloudy water - tactics for bass on fly and lure. 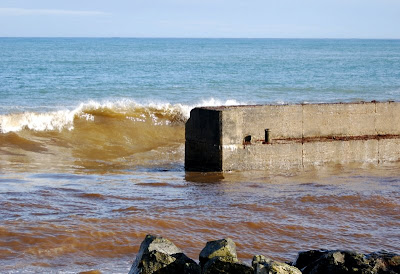 The photograph above is now a common sight on the south east coast, and has been especially visible and regular over the last few weeks. The lethal combination of continuos strong winds and heavy rain adds 'colour' to the water, combined with large deposits of rotting seaweed it spells tough times for the fly and lure fisherman. Circumstances like the one above are at the extreme end of the range and as the first thirty meters are brown I am often asked, especially by flyfishermen, as to what to do.

There are two major types of fish - the predatory type and the scavenger type. Predators tend to want to catch and eat most of their prey when its alive, although they will scavenge if they need to. Using their highly developed senses of smell, sight, sensitivity and hearing they locate their prey easily. Sight is a very well developed sense in most fish and is especially developed in those that are predatory. Bass eyes are located high on their heads looking forward up and a lot to the side. Contrast and Movement play a BIG part in their vision.

Because of water clarity in Ireland and its normal restrictions, fish tend not to see beyond twenty or thirty feet. However lots of fish dont 'look' beyond a range of ten feet any further is too far! They have good colour vision and they have excellent night vision too. Predators rely on sight as the major tool in the hunting box. But what happens when they cant see effectively? 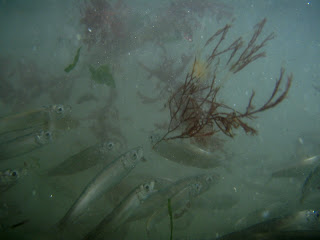 The extent of the turbidity of the water is usually indicative of whether bass will be present or not. In the photograph above they are most definetly not present, this photograph was taken after some days of very strong winds and rain. The photograph to the right was taken after the wind had blown but the weather was improving and the sea was 'fining down' or settling. Bass would be present in the circumstances to the right even with the suspended particles and seaweed present. The camera visibility here was reduced to about two feet.

Tying up subsurface visibilty, the weather and its impact on your fishing has been discussed in Part One. Here are some pointers to help when the sea is murky.