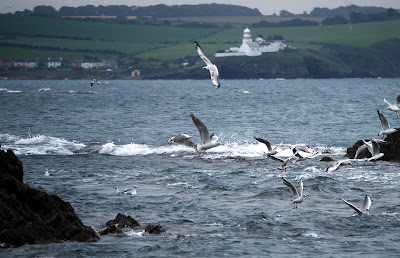 The surface of the water boiled with hungry mackerel, baitfish jumped for their lives and they swam as a tightly knit group believing in safety in numbers. But they had nowhere to go as the mackerel had them cornered in the little coves, they tear through the massive bait ball time after time, hammering the shoals, picking off dinner almost at leisure. Here they come again cruising at flank speed up one side of the little bay; the sprats momentarily turn the brown rocks silver in an attempt to avoid the saltwater tigers, they jump out of the water to escape. 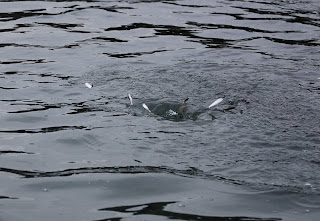 A Mexican wave of tiny jumping and frantic fish spreads along the side, then across the shore and down the other side of the little cove. The water is full of tiny flashing scales, and green and blue striped merciless hunters. 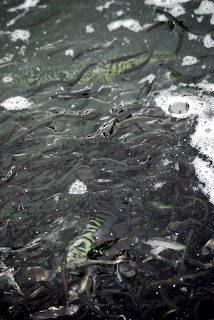 The vast mackerel shoals on our shores during late August and September are a great example of a migratory fish. Mackerel don’t reside inshore but rather take advantage of bait movement. Here in Wexford the shoals generally don’t arrive until the first spring tides in September but further south they can be caught much earlier. If conditions are favourable they can be caught right through until late October. Of course it’s a great time for many anglers and the beaches of the south Wexford coast are often at their busiest.

Because of their vast numbers, suicidal tendencies and sheer ease of accessibility, mackerel fishing is great fun for children who like fishing or would like to catch fish in the sea for the first time. Often within spitting distance, casting to hundreds of fish with the simplest of flies’ life can be fun in the middle of a blitz. The whole phenomenon is a big visual fishing treat. Standing and watching the water with my two guys, Dan aged eight and Ruth aged six, they would literally scream with excitement as the shoal moved along the surface of the sea towards us. ‘Here they come again Daddy, look. Look.’

And sure enough as the fish came closer not only could we see the surface of the sea boiling but we could hear it as well. The frantic baitfish swam as best they could, hundreds of mackerel charging at the shoal fleeing for its life, it sounded like the heaviest downpour you could imagine. They swam and hunted past us and were gone again. We turned all three of us and looked back up the shore anticipating the arrival of the next shoal and the excitement of it all.

Eileen had phoned me earlier that week from Cork to say Dan had been catching sprats in his swimming trunks during the evening and both he and Ruth were eager to get their rods from Wexford. I had two days off and decided I had better head down that way as they both sounded like things possessed on the end of the phone. They both told me stories of swimming in mackerel shoals, ’..the fish were all around us Daddy’!

I had a light spinning rod and some spinners and a #5 seven-foot fly rod loaded with a floating line that we used regularly for ‘exploratory fishing’. I’m not the kind of person to force the situation and both kids will tend to sometimes want to go fishing and sometimes they don’t. Admittedly spending a lot of time fishing with people, when you arrive home and are asked can we go fishing Daddy can we, can we? It makes me smile a bit. Ne 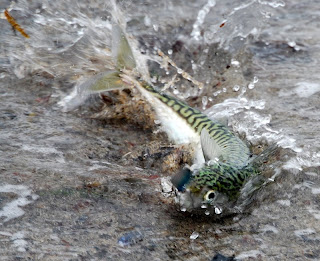 ither do I force them or encourage my children towards any particular aspect of fishing but rather tend to steer them towards the activity itself. Fly or lure who cares at this point its better than sitting in front of the TV on a grey summers day!

What I want and would like them to learn is to carefully catch some fish, handle them with some respect and either kill one or two for eating or return them to the sea. I also want them to have as much fun possible doing this. Last year Dan had a problem with the killing of some mackerel that we had caught, so much so that he stopped fishing for the rest of the summer. I didn’t want this to affect his fishing adversely and had little chats here and there and let him reason it all out 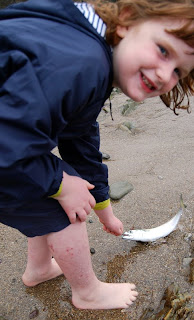 for himself, answering questions (when prodded by Eileen) regarding his ‘fishing logic’, farms, trawlers, etc. He arrived at a position where this year he instructed me that we needed only to kill two fish per person and only if we wanted them or we knew somebody else who did.

So off we went that evening on our great mackerel hunt. Ruthie with her light spinning kit and Dan with the rod with the ‘backwards reel’ as he calls it. I had been watching the wind and knew that in this bay as it blew westerly and offshore the sprats would ball up and swim tight to the shore. Personally I was thinking a little ahead I knew it would swing and increase southwesterly in the next few days, this created white water and confusion amongst the baitfish and fired up the BASS. We’ll leave that to later. Walking down the slope to the beach Ruthie said rather matter of factly, like a seasoned striper fisherman on the east coast of the US ‘they’re there all right’.

She had learned to spot individual fish as they cruised and picked off wounded or confused sprats, they were visible as individual splashes on the surface. I was impressed. ‘We’re not after those guys’ said Dan ‘we’re going to the creek to catch them’. The Creek as its known locally is a deep gully with high sidewalls that forms a natural collection area for sprats. Dan said to me that he could see the seagulls flying over the creek and that was a sign of fish. ‘That’s what grandpa says Dad!’ Good man Jim Powell. 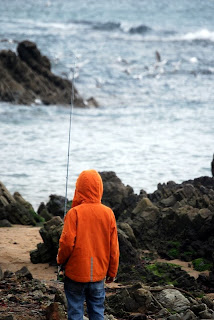 It’s only a short walk but it takes us of the beach, which can become a little crowded and somewhat dangerous at times. But its somewhat easier and anyway a little walk never did anyone any harm. We arrived and sat down and watched. The seagulls had fallen back to another feeding spot and the bay was a dark mass of hundreds of thousands of sprats. And here they came, leisurely feeding at will, swimming through the bait ball stuffing themselves on small fish. I cast at first for Ruth and she retrieved the spinner, almost immediately a vibrating fish was on. The little rod rattled and shook as if electricity was passing through it and Ruthie fought her fish valiantly! I can feel him, he’s a big one Daddy a HUMUNGOUS one I think.

Then it was Dans’ turn, a fish every cast. I had de-barbed the hooks for safety and ease of release. I wanted them both to get used to feeling the fish in their hands and been able to hold them properly and not be afraid. With wet hands and a gentle grip they managed this many times although its not easy with a vibrating, electro fish like a mackerel. From then on we released all our fish simply by shaking them of the hooks and not touching them at all. Then I introduced the fly rod, Ruthie from a practical point of view said she preferred spinning.

At this point in time Dan can lift and cast the head of a #5 and retrieve – enough to hook a mackerel and enough to get that ‘feeling’. He very much takes it or leaves it and that’s fine. We huddled together over little pools and I explained to them both how the flies and lures we were using fooled the mackerel into believing they were sprats. 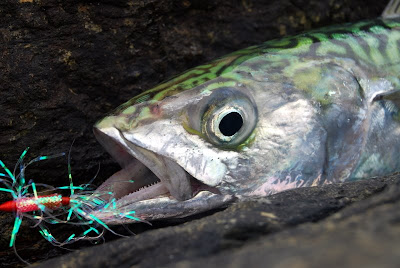 We examined the mackerel we caught closely, marvelling at the colours, their big eyes and Ruthie remembers that mackerel have a spike too! We put one in a big pool and watched it swim around and around and I explained that they never stop swimming, we watched him powerhouse his way through shallow water back to sea and Dan says I’m going to catch him again and he made a cast and caught him again….

And then we had had enough, and already as we walked up the hill to the house in the autumn dusk the questions were fired, the conversation was fishing. ‘Where will we go tomorrow?’ ‘Do you think I caught the biggest one Dan?’ ‘Did you see me casting far?’ ‘How many did we catch Dad?’ ‘I’m not touching anneee tomorrow Dan’. Its funny now, listening as we neared the house, with the porch light on, I had heard similar words earlier that week, but from people a lot older than Dan and Ruth.
at October 23, 2008