Bass fly fishing Ireland - P13 - Where are the fish? 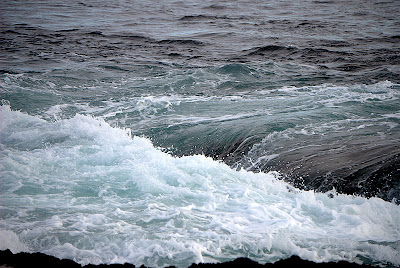 Lure fishing for bass in the sea whilst difficult at times, and fly fishing too with its greater challenges should not to be viewed as impossible tasks. They do however require some particular skills. Casting yes, presentation yes, patience yes, but the essence of this post is based around the knowledge of 'where the fish are'.
If you spend some time with succesful fishermen and you happen to have found one of them who will talk sensibly about his experiences over time, you will quickly learn that they have several unique abilities. One of them is that they instinctively seem to know where the fish are, or rather they know where the fish are going to be! The 'where' is not specifically like what we have mentioned before HERE but rather the 'where' along many miles of coastline (be it estuaries, current, rocky headlands, open beach) at any particular point in time during the day. This of course doesnt mean that ALL the fish gather in one location that is privy to only a few people, but it does mean that at certain times under certain conditions, you are more likely to catch fish at location X rather than Z. 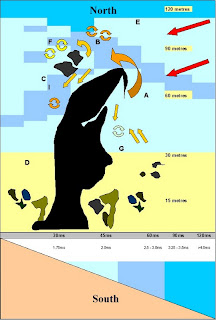 During the periods of dawn and dusk contrast should play a significant role in your lure and fly colour choice. With fish staring into the sun against a lighter bckground a darker lure or fly will appear more visible. Bass tending to hunt mid or low water in these conditions may need to change position more frequently to view prey from different angles to make determinations. Having to change and jostle for position will expose them to the strengthening current, this current as I have mentioned may be stronger because of lower atmospheric pressure and wind force and hence the fish may not spend as much time as they would hunting in this local as they are expending energy. In other words this simply may not be the place to fish today! Fish holding lies are often volatile and based on subtle external influences that can change from hour to hour and day to day!

Appearing to have what can seem like the fishing powers of a Jedi Knight is based over years of experiences coupled to a high level of sensitivity towards many of these influences.

Next - Making the best of the circumstances