Fishing Report - Barracuda at the airport 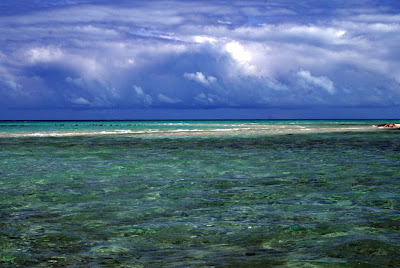 Fred sang all day. He was the happiest and the funniest guide I fished with all week. Fred loved barracuda fishing and here we were at location B, a barracuda shopping mall where they cued up to eat Bruce’s special fly. At a barracuda fly fishing primer Bruce Chard discussed his theory that the fish hit the fly half way down the body rather than at the head, he reckoned long flies produced less fish due to ‘tail biting’. ‘Cuda cut their prey in half, then turned and came back to ‘mop up.’ All these points were discussed at length but when I hooked and fought my first ‘cuda on the fly these finer items of the take were not at the forefront of my mind believe me!

It was a long run to location B, just a little over an hour for a 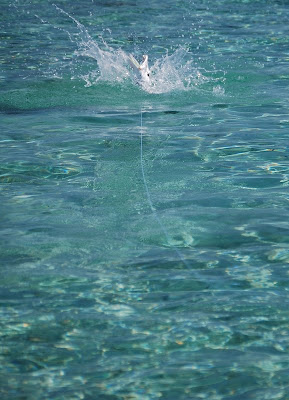 distance of some fifty miles. The further south we ran the greater the sense of sheer isolation. There was no Monday or Tuesday here, no production meetings, no shirt and ties, no schedules or timetables, and the more I considered the vast expanses of the ever changing flats, watching them light up and disappear only to re-appear again in vastly different colours the more I realised how far I had moved away from the ‘normal world’. I was completely unplugged. We were way south of Andros Island. The next stop was Cuba.

We were charging towards a green horizon with no visible landmark insight, Andros was already left far behind. Fred pointed at something that only he could see

Slowly a bright bar silver appeared in the distance. As we powered closer I realised the tide was fully out and just beginning to rise over a long single sandbar of impossibly white tough gritty sand. In the distance on top and slightly to one side of the bar lay the ruins of a twin engined light aircraft. Long rusted into a hulk of barely recognisable metal. 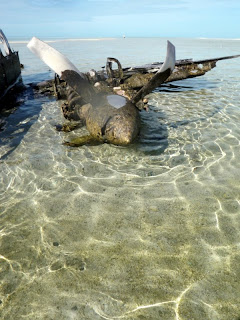 ‘Now ya know why day call id de airport’ Fred said, and he laughed and sang a few bars from a John Denver song.

‘Lets get oud an wade to the bones’

Momentarily I wondered was he referring to the crew that had perhaps remained in the cockpit and were now nothing but skeletons in ragged blue uniforms, the heat does strange things. I shook my head. The skiff scrunched to a stop and I picked up my trusty number 7 ready to do battle with some bonefish. Earlier Fred had instructed us that later into the morning as the tide flooded was perhaps the best time for ‘cudas as the bonefish schools streamed over the sand bar. I wondered how fast something had to move to catch a bonefish! In the first few hours we could wade and hunt a few single bonefish in the glittering silver flats.

My casting was off and I insisted on trying to put my crazy Charlie into the fish’s mouths from sixty feet. This did nothing for my chances and of course I spooked every fish I cast too, Fred grumbled several times (who could blame him). I went and got my camera. David was catching a lot of very good fish; I sulked and took some photos! Some days there is no point in forcing things. I pointed and clicked and made my way back over the flats towards David and Fred. As I got closer to the pair I whispered to David excitedly

Slowly I became aware that the darker underwater patch that lay waving and moving slightly in front of me wasn’t some grass or seaweed or different sand colour, it was a vast school of bonefish, and as my eyes adjusted I could see thousands of tails and fins flashing in the sun, fish moved towards me and away from the shoal, groups broke off, swam away and returned, feeling scared. It was a shimmering pool of biological silver. 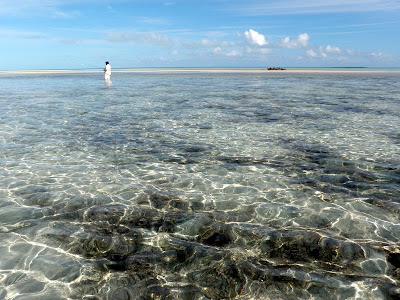 The school of bonefish stretched as far as I could see both left and right and into and over the horizon. David smiled at me. Fred chased away a six foot lemon shark with a crazy splashing dance; he hummed the theme – dun dun, dun dun, dundundundundundun. My brain was short-circuiting; I needed a sit down under a tree. I couldn’t speak for a long time.

We had a lot of fun that morning in the middle of nowhere – the three of us. It was a very special moment.

Fred said the sharks were coming too close now as the water was getting deeper and they would start eating our fish, or us. Apparently they had the advantage when the water got to ‘calf level’ I looked behind me a few times on the way back to the boat, not sure whether my wading was attracting them or putting them off. As I was leaning over the boat washing the sand out of my shoes Fred advised me to keep my hands out of the water. He smiled!

We went on the hunt for ‘CUDAS as the tide was ripping over the sandbar and down the gullies.

Fred manoeuvred the little skiff into a shallow channel through which the tide was flooding. He
took his position up on the poling platform and asked me to be ready to cast. I was fishing with my number nine and the Bruce Chard ‘cuda special fly. Bruce had already explained to me to strip fast. I simply wasn’t ready and didn’t know what to expect – Fred called to me that he could see a fish holding at two o clock at about 120 feet. For me it was always going to be easier to distance cast – I made the cast (couldn’t see the fish) and began to strip roly-poly style, faster said Fred. My hands disappeared into a sewing machine blur. 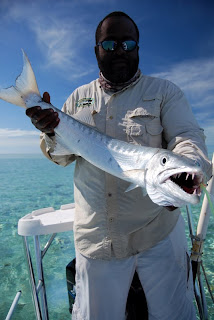 Then what I saw next left me dazed and confused (as if I needed more sensory overload). The fish was swimming not from behind the fly but rather charging from the left hand side, at least I assumed it was a fish. A closer description might have been a prototypical silver torpedo with teeth that also had the address of my fly in its memory. I simply couldn’t comprehend the speed of the fish travelling more out of the water than in it, and then he had hit my fly and the reel screamed in terror at the prospect of what lay ahead.

In the shallow water the fish ran for maybe fifty yards and then decided that going vertical might achieve more in terms of an escape plan. There was an explosion as the fish jumped from the water and shook his head far from the boat – so far I wondered was that MY fish? And then he ran and jumped and tail walked again and again 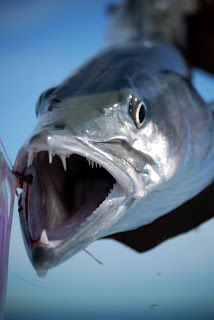 This went on for ten minutes until finally he was brought to the side of the boat and expertly handled by Fred. These were the little ones.

Fred said lets go to fish quay! I agreed, David smiled knowingly; he was in one of his ‘been there done that type of moods’ that meant – you don’t know what you’re in for Hendrick. At the back of the tiniest sandbar in the lee of an island where two lemon sharks snoozed in the afternoon sun I cast and hooked another renegade torpedo. The take was fierce and I was pulled over and had to take a step forward and plant my foot, then lean back a little. The reel was emptying rapidly, screaming in protest and even though I had the drag nailed tight it made little or no impact on the fish. 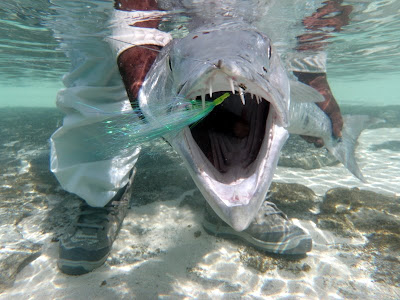 One hundred yards later it stopped suddenly, the silence was deafening and then out of the sea jumped the barracuda, again and again! Swimming at speed, jumping with ferocity, head shaking and finally, finally giving up. I landed him on the beach as Fred had poled the skiff up to the little island. He told me to step out of the water as I had one big and angry ‘cuda on the end of my line! I looked at David baffled and searching for words that I still cannot find.
at November 30, 2009