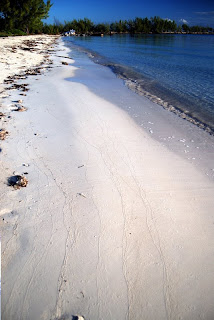 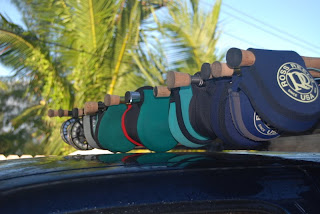 The anticipation that I felt on Monday morning was almost at times overwhelming. We had been in the US for 24 hours before flying across to Andros and then I attended the bonefishing school with Bruce on Sunday, more of which later.
What I had been waiting for was here at last, this was the real thing, my first days bonefishing on the fly.
Everybody from the lodge in our group was up and about each morning at 05:30 for a quick coffee and orange juice from the dining room, breakfast was served each day at 06:15. I had a quick coffee then followed my strict regime of sun factor application, the last thing I needed was a bad burn.
The fly-fishing gear, our lunches in cool boxes, and all the safety packs for the guides were loaded on the jeep and we were bussed to the little harbour about ten miles away.
Arriving at the quay we waited for our guides to arrive in their flats skiffs. We donned life jackets and speculated as to our locations and weather conditions and fly choice. 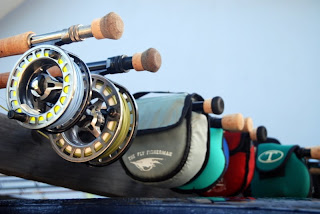 Our guide for the first day was ‘Sparkles’ and David having had the experience of Andros before, spoke about our requirements to him – as an intro we would stalk some individual fish in the morning and then try to locate a school in the afternoon. The gear was loaded on the skiffs, everything expertly managed by Rick, the rods slid into their little chutes already loaded with leaders and flies. Out here things happen so fast you don’t get second chances!
I removed my cap as the guide and the skiff fell away from the little quay and accelerated into the tidal rip that was pushing west – this was our ultimate destination – a ‘run’ for perhaps one hour through the middle of the island at break neck speed in shallow water to find the fish feeding in the gleaming flats – the adventure had begun and as we sped along into an unexplored wilderness the temperature had already risen above 25 degrees, the sky was blue, the water was crystal clear, the low green mangrove jungle lay in miles upon miles of impossible tangles. It was 07:45. 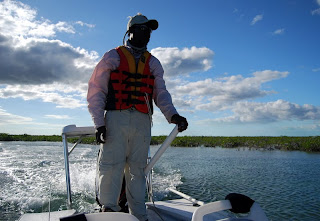 One hour later David was on the casting platform of our little skiff. The silence descended. Sparkles poled us along the margins of the mangroves. He said couldn’t see properly as the sun was hidden behind some cloud cover. We persisted for a while and then he told us to jacket up again – we would run further west over the ocean flats to a distant island where the sun was shining.
This time I was on the casting platform.
The skiff coasted to a stop in a slow tidal rip running downwind behind a little island, sparkles poled me down the length of the white sandy beach and at the end of a little sand bar he swung around and began to pole back up the other side, 20 metres from the shore – against the wind. 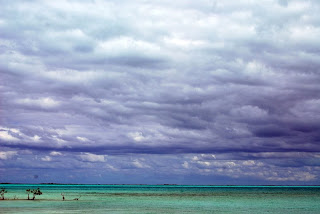 I held the fly in my left hand and about 10 feet of fly line outside the rod tip, I had about 50 feet lying in the bottom of the boat, I stood rocking slightly, scanning the impossibly blue and clear water for fish then Sparkles spoke very quietly over my left shoulder the words that I will never forget and in some strange way was almost afraid to hear 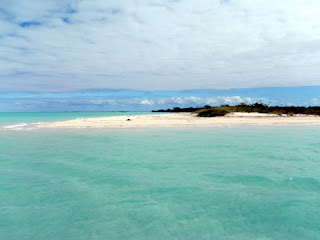 ‘Big fish comin’ straid atcha - eleven o clock – fifdee feed’
I oriented myself on the clockface and peered into the rippling water’
Do ya see ‘im ?
No
Twelve o clock, goin ride, fordee feed’
Do ya see ‘im ?

To say that at this time that my level of attention and focus was high is one thing. I was so hyper conscious I could hear the guides pole sliding into the sand and out again, the water dripping from the end, the gentle flapping of my shirt in the warm breeze, the fly line tapping against my fingers, the call of a disturbed bird in the midst of the island, the peppery smell on the wind, I couldn’t see the fish and waited for Sparkles words again.. 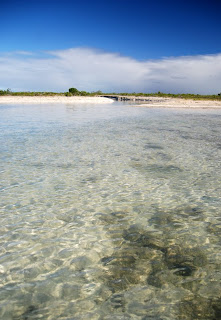 Now I saw the fish, and two more! 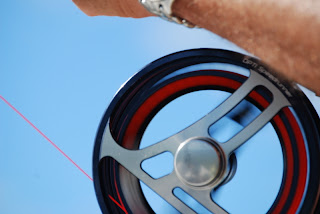 Hes comin atcha – and then, fish on he said –
His voice had never risen above a gentle conversational tone, the word ‘on’ was spoken loudest, but still as quiet as a priest in a confessional.
The big wheel of the loop opti spun at an incredible speed as the fish realised he was hooked, I applied gentle pressure to the line to let it slip evenly and within two or three seconds I heard the clink clink as the bimini passed out through the rod rings. Then the reel spun into a halo of orange mist as the fish accelerated upwind away from David Sparkles the boat and I, this was the first run into the backing. At eighty yards the fish stopped. I wound, he swam and my knuckles were rapped HARD as he accelerated again for ten yards more. He turned and swam at the boat, at speed, I wound frantically. The fish passed us and Sparkles whispered ‘mon dats a gud fish ade pounds Id guess'. The fish swam away again and Sparkles poled us downwind towards him. I could not comprehend the speed and the power, the ability to accelerate was incredible. 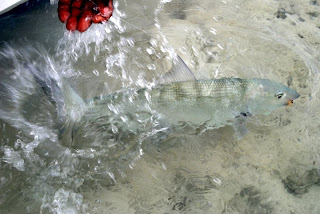 Ten minutes later he was at the side of the boat, I got his head up a little and the perfection loop passed over the tip ring. David reached for the leader then he swam away again, unbelievably for another thirty yards, I wound and then Sparkles spoke again from over my shoulder, I heard the chilling words expressed calmly and low but also containing a sense of frustration. 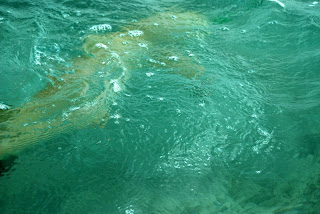 I bullied the fish as best I could but there was a sudden fierce flurry of red and white and dark yellow as the fish on my line was eaten by the shark. The line went slack the fish and the fly were gone.
I replay it again and again - the experience of the first bonefish that I ever caught, I will never forget it. We had a long day ahead of us, my life was changing. We ran to another location.......only eight days left. This surely was the greatest fly fishing in the world!
at November 26, 2009