Bass fishing and the Irish Times 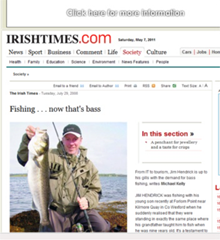 From IT to tourism, Jim Hendrick is up to his gills with the demand for bass fishing, writes Michael Kelly

JIM HENDRICK was fishing with his young son recently at Forlorn Point near Kilmore Quay in Co Wexford when he suddenly realised that they were standing in exactly the same place where his grandfather taught him to fish when he was nine years old. It's a testament to the love that Hendrick has for fishing that he still enjoys it as a hobby, despite recently establishing a business around the sport.

Shortly after he started trading - season 2003, however, the first group of journalists came from France to experience bass fishing in the county and when an extensive feature about their experience was published in a French fishing magazine, (see Here) his phone started ringing. French anglers came in their droves, followed by Dutch, Belgians, Italians and Danes (and, more recently, the Irish).

It's a far cry from the situation that Hendrick found himself in back in 2003. A graduate of NIHE (now DCU) in Dublin, he had been working in manufacturing companies in Wexford in materials management and information technology roles - firstly in Wexford Electronics which he left in 2001 and latterly with Snaptite.

"I was brought in to help implement an enterprise resource system for Snaptite and I basically engineered myself out of a role. Once I had the system implemented, there was nothing left for me to do."

Out of work, he found himself wondering if it was time to move on from manufacturing and IT. "You can only take so much exposure to 'Jim, my PC is not working' before you get frustrated by it," he laughs.

"My wife Eileen is self employed. She runs an interior design business and when I was working, we were only really seeing our kids for a few hours in the evening. I started wondering why we bothered having kids at all if you weren't even getting to see them."

Like many people looking for their dream job he turned to his hobbies for inspiration and wondered could he convert his expertise as a bass fisherman into a fishing tourism business.

As if fate itself was knocking on his door, the semi-detached house next to them came on the market and the couple decided to buy it and use it as accommodation for visiting anglers - a risky proposition given the fact that Hendrick didn't have a job at the time. With the assistance of a Leader grant (the EU Community Initiative for Rural Development), they renovated the house to bring it up to Bord Fáilte accommodation standard, ready for the 2003 seaon.

But what type of fishing to offer his visitors? Having fished for bass all his life, Hendrick was inclined to stick to what he knew - but Wexford had little track record as a destination for bass fishermen.

"The focus in Ireland had always been on pike, salmon and trout but I had been to Texas and Mexico with my old job and I had been very influenced by the US anglers, in particular the technology that they use for bass angling. I met David Byrne from the Fisheries Board late in 2002 and I was asking him, why not bass?"

What's the appeal of the species? "For most anglers, catching a bass is a very big prize. It's an enigmatic fish. Bass fishing attracts a particular sort of angler, mainly young people. It's considered almost an extreme sport because bass grow very large and they are very tough to catch.

"It's physically very demanding. This type of fishing - where you are fly or lure fishing from the shore - is new and exciting and because the equipment is lightweight and easy to carry, they can travel all over the world with the gear. They are demanding tourists - it's not a case of them coming here and doing a spot of sedentary fishing. They come here expecting to catch bass."

His visitors typically spend a week in Ireland, fishing twice a day and visiting local tourist haunts such as Hook Head and Tintern Abbey. The bass season - roughly from April to October - is a marathon of sorts for Hendrick.

"There are very early starts because we fish very early in the morning and late at night. That means being up at 3am most mornings. You really could run yourself ragged in the summer because these guys are on their holidays and they want to have a meal and a few beers at night. I have to be careful of that!"

Like any tourism business, he is at the mercy of the Irish weather. While fisherman generally have the gear to make the sport weather proof, bass are heavily influenced by the weather and they tend to stay away from the shore when there is wind, rain and cold.

"It's very tough at times and some weeks this summer have been a disaster. I have had to ring people who were due to arrive and cancel due to the weather. You are literally losing thousands."

There are, however, always bright moments on hand to convince him that he has made the right move. He tells me of a recent visitor who had never fished before in his life and within four hours caught a 10lb bass. "It's very much right place, right time. I know of fishermen who have fished their whole life and have never caught a 10lb bass.

"When I see someone catch their first fish and they are clutching it to their chest with a smile as broad as a canoe, that's what it's all about. As long as that keeps happening I will be fine."