What we dont know

Putting your fly or lure in the right place at the right time is great way to catch fish. One of the most common questions I'm asked at my workshops and through e-mail relates to choosing the correct fly or lure at any time for the circumstances. 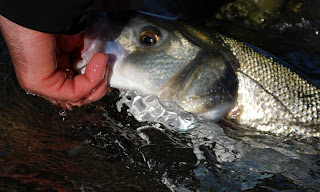 Those circumstances can be as wide as water colour, depth, speed of current, weather conditions, tidal flow and on it goes. You can do one of many things and make it very simple - fish soft plastics bounced and twitched on the bottom (break your wrist and nothing more) lift and drop in the killing zone and there is no doubt you can catch many many fish. Of course there is a degree of knowledge required as regards timings and a fair degree of water craft and practice and time invested to do this but you dont have to know too much of anything else to have great fun and to catch a lot of bass.

From another angling perspective putting out a fly line and fishing a clouser in the zone and getting it to behave in a similar manner happens to be a more challenging pursuit, for many reasons. And the inevitability here of course is to draw comparisons between the techniques or worse still to divide anglers into segments based on technique and then attach greater or lesser extents of expertise to those anglers and techniques. Even more silly is to think that anglers who practice one or the other and catch large numbers of fish have greater or lesser degrees of 'angling superiority and ability' - effectively dividing anglers into a class system based on techniques or numbers.

Its obvious that to physically and successfully cast a fly on a fly rod into the sea and catch a bass requires more skill than casting a soft bait on a lure rod to do the same thing, but with a far lower catch rate - and what difference does it make really? The choices we make regarding our fishing techniques are our own to learn and discover and practice and perfect as we prefer. Some require more knowledge and effort, others dont. But all require time invested in the fishing environment.

The one element that seems to be forgotten in this frequent bullshit debate of 'bass fishing technology preferences', the most important one, is the fish and its appreciation.

We have a fantastic national resource on our hands in bass fishing in this country. New technologies now allow us to present to fish in many different locations with techniques that have not been possible before allowing us to catch more fish, bigger fish, more mature fish more regularly than ever before. But we dont know how many are out there.

What we do with those fish is our responsibility as anglers, we need at times to proceed with a degree of caution. But we dont know how many we kill or when or what that impact might be.

The fixed spool reel didnt spell the end of angling as was feared by many when it first appeared - nor will soft plastics. There is anecdotal evidence that bass in Irish inshore waters have 'recovered'. But we dont know to what level.

That recovery is nothing in comparison to the abundance of the species that my father would have witnessed as a young man in Wexford. There is no current scientific evidence or political interest to map the scale of that recovery having had twenty years of protection. But we dont seem to know how to leverage the benefits.

Neither is there a will to examine the extent of the blatant clandestine illegal fishery as it continues to contribute to the failure of the fishery to recover even faster. We dont know its impact or true scale.

Much comment is made as to the effects of recreational angling in comparison to commercial pressure - and as the interest and accessibilty to the fish increases so too will the recreational impact. An illegal 200 metres of net in one shoot does immeasurable damage, a re-opened commercial fishery would destroy the species in perhaps two seasons. We dont know if the commercial ban is firm for any period

Recreational impact at this time is at a minimum in comparison to the above. Most bassfisherman I know are C+R oriented and handle fish with care, most will kill a fish for the table very irregularly, most observe the closed season. Some of course dont and have various illogical reasons for not doing so. The closed season begins on May 15th but in fact fish are spawning since mid April because of current conditions.

We dont know the possible effects of growing recreational pressure on important locations on a species like bass in Irish waters.