On the edge ~ always… 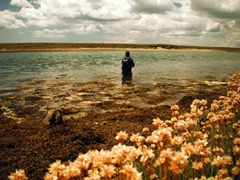 ve happened at any time over the three days and indeed it sputtered into life a little on the evening of day three. The fact of the matter is that David never let the opportunity, if it existed, pass him by. He persisted, and when fishing is difficult this is what it comes down to. Focus and attention to detail can get you that one or two fish even very late in the game.

I went through the phases with him on each day through rising temperatures, falling temperatures, sun, rain, wind, blue sky, cloud, Northerly, Southerly, it was all there. Clear water, cloudy water, as my daughter says, whateverrrr…..! Overall conditions remained very very fishable and never really deteriorated severely; they only exhibited variability, constantly!

It was Tuesday afternoon that rea 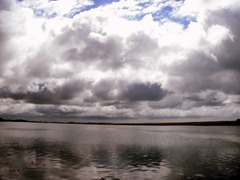 lly had my heart racing – a day that I often refer to as a big fish day and certainly the chance was there with everything falling into place but it was not to be. And that’s the way it played out over the three days, the possibility existed and we could have been lucky and eked out a bruiser or a wayward shoal, but it wasn’t from want of trying or tactics or effort or skill on David's part. He’s now the consummate bass angler, perfectly capable of anything. 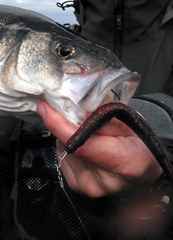 ere were no numbers of fish in the systems but it always felt like we were just on the edge, very close, just out of reach, a fish away from making an experience a permanent memory.

And then at our feet a fish and another - David had hit them with his favourite method - soft baits.

But then isn't that bass fishing - always on the edge, always.

If you want to learn more about David's experiences and his thoughts on soft plastic fishing and presentations for bass then don't miss next months Irish Angler magazine - David is running a three part series packed with information about these techniques.

Some ideas for when its tough HERE