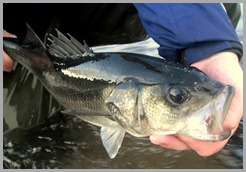 In July and August, the largest fish, occasionally bass of fifty and even sixty pounds, rejoice the heart of the angler by surrendering to his skill, while in the Fall, although more numerous, they are smaller.
In both these particulars, the fishing at point Judith and West Island, and further Northward, differs from that in the vicinity of New York. Great success, however, depends upon several contingencies. It is supposed that the Gulf Stream, that prolonged current of the Mississippi River, which sweeps with its warmer temperature through mid ocean carrying a genial atmosphere and fertilizing showers to the otherwise arid shores of France and England, changes its course yearly, approaching our coast and sending its swarms of living creatures among the rocks of Narragansett Bay, or withdrawing so as to leave us desolate and to increase the severity of our winters.
We all know that our cold seasons differ greatly in intensity, and bass fishermen know that success in fishing varies equally; but from what cause these results flow, no one can positively say. 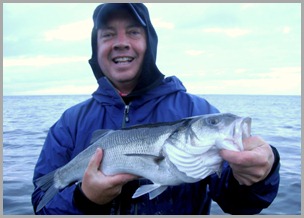