Well Jim
We left the hotel in orlando at 3.30am myself and mark and drove 155 miles to Port Charlotte to meet Robert at 6am sharp. With my steady driving, we were at the boat ramp and 5.40 and ready for action. Shortly after Robert and Vinny his mate arrived and slipped the boat into the water. Sunrise was 6.35 am and the plan was to throw  cast net for live mullet to freeline from the back of the boat and I was to cast live mullet at rolling fish although Robert felt there was a good chance of a hook up on a SP fished just under the surface and as slow as possible.

Even throwing the cast net was exciting as we waited for sunrise so we could see the mullet shoals breaking surface... It wasn't long before we had a 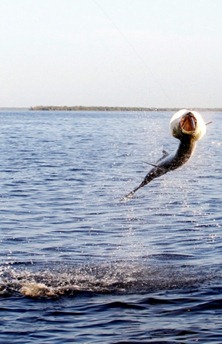 bout a dozen perfect sized mullet(about 9 inches long) and we were speeding out to where Robert had located the shoal on the previous two days. He reckoned in his matter of fact southern drawl that there was about 5,000 fish in the shoal and he said we will see many many fish rolling and hitting baitfish. I thought he was dreaming until the day unfolded.

Within 15 mins we were on the trolling motor searching around the spot recorded on the GPS, sun was just up, and we were about to come off slack tide and Robert said to listen for 'em. Unbelievable when I seen the first Tarpon rolling. And sure enough it was constant for the next 3 hours. I now believe there was 5,000 fish in the shoal!
Vinny clipped the fins off two mullet and set them out the back of the boat. as he was doing this I started blind and sight casting to the rolling Tarpon with the most unlikely SP. After about 10 casts I said to Robert(you know me well enough now!)"do they really hit these little plastic yokes" He replied "sure do, they are Tarpon candy". 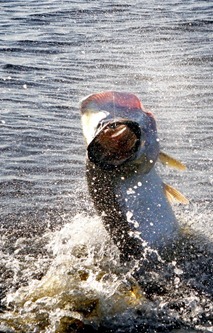 Then, a fished rolled, i casted to him 5 foot ahead like i was told and began to reel so slowly, in fact painfully slowly and really difficult to do with all the excitement. I felt two little bumps and said to Robert, "do they bump it before they hit it?"... before he answered the tarpon slammed the lure and I was on tight. I set the hook and he jumped about 10 feet in the air. MAGICAL and unforgettable. He jumped and fought and jumped and fought for 25 minutes plus. Vinny slagged me over getting "Tarpon shake" where I had to let go of the rod with my right hand and shake the tiredness out of it. Of course I moaned a little and begged, literally begged the fish to give up. But he wouldn't. I eventually got him to do the "circles of Death" where it kept turning in a tight circle at the edge of the boat about 5 feet under until he eventually surfaced. We tagged him and Robert took DNA from him and he was released unharmed. Estimated at 80lbs.

This pattern repeated itself 4 times. The second fish came in at about 40 lbs and Mark fought him with great difficulty. See photo attached.
The third fish jumped 20 feet into the air when i set the hook. Robert and Vinny were amazed never mind myself and mark.

The fourth fish jumped four times, i was cocky and too casual and forgot to lower the rod on the fourth jumped and the 60lb mono was sheared by the fishes sandpaper type teeth. I think he was the biggest, and Robert says he was a"a buck twenty or thirty easily". i was ragging but i had my fun and probably would have had to give him to vinny to fight as my right arm was dead. in fact it still is now 7 hours later.

Sorry for giving you the whole story but I wanted to record most of it while memory was fresh. 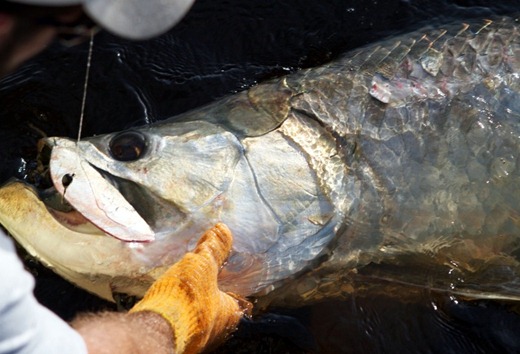 I cant believe I hit 4 with lures and landed 3. Unbelievable considering Vinny has never had a Tarpon on a lure. Robert was impressed but sure I told him I was taught by a master lure fisher from Wexford!
Bendy Bendy
Andrew