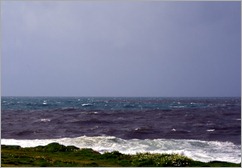 Rainfall totals were above average everywhere with the highest summer percentage values measured in the South. Long-term average (LTA) values ranged from 121% at Belmullet to 224% at Fermoy (Moorepark). Mullingar and Cork Airport reported their wettest summers on record since 1944 (68 years) and 1962 (50
years). Claremorris and Knock Airport also reported wet summers, with their highest rainfall since 1985 (27 years) and 1996 (16 years), respectively. Almost all places recorded above average rainfall during the three months of the season with the exception of some areas in the East and along northern and western coasts in
August. The highest rainfall relative to average was recorded in June, where LTAs ranged up to nearly three times above normal in parts of the South and East. Stations recorded their highest daily rainfall mostly during June and in heavy showers during mid-August. The highest daily rainfall of the season was at Malin
Head, where 50.9 mm was recorded on the 22nd June, its highest summer daily fall since 1955 (57 years). There was an above normal number of wetdays (days with 1 mm or more) recorded this summer (between 44 and 65) with the highest amounts recorded in the West and South.Sunshine totals for summer were below average nearly everywhere except in western coastal areas. Overall,
June and July were relatively dull with August also reporting dull conditions in parts of the South, East and
Southwest.