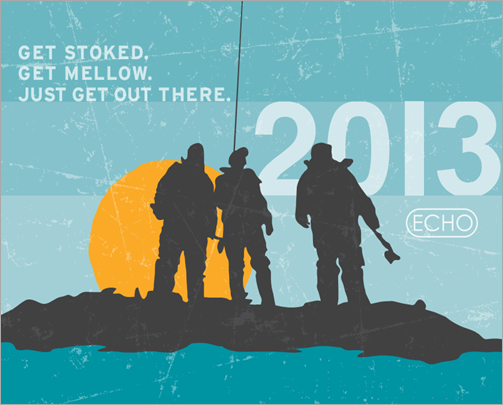 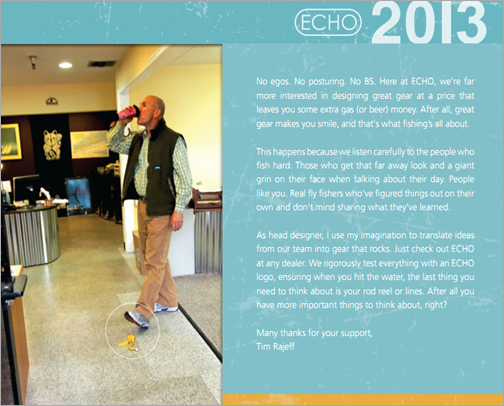 Rajeff Sports is a small, personal, company of fly-fisher folk residing in Vancouver, Washington. They are the vision of Tim Rajeff—the culmination of his huge personality and an outlet of both creativity and service to the industry. Currently Rajeff Sports distributes Echo Fly Rods to the world and Airflo Fly Lines to North America. They strive to provide quality products and customer service to their fellow fly-fishers.

As the founding father of Rajeff Sports, Tim tends to be busier than your average bald guy. When in the office, he spends all his time designing new lines and rods, addressing managerial-type-stuff or helping with customer service. When he’s out and about, you will find him teaching casting classes, giving seminars, or pursuing fish in various waters.

Tim’s extensive knowledge of fly rod design and performance stems from his early childhood patronage to the Golden Gate Angling and Casting Club in San Francisco, where he became a young and successful competition caster. Tim has received a gold medal in the World Casting Games in single hand distance as well as winning the national overall fly accuracy and distance championship. Tim first began designing rods in 1980, and was one of the first people to use and adapt graphite fly rods in competition casting.

After spending his youth fishing and casting in California and Oregon, Tim’s fishing career took a turn when he took a job working for the Fenwick Fly Fishing School in Montana during 1973. In 1985 he made the trek north and began guiding in Alaska, eventually moving on to develop and build the first fishing camps on Russia’s Kola Peninsula, 60 miles above the Arctic Circle. He spent six years managing these camps before returning to the states in 1994. Upon his return he began working for a premium domestic rod manufacturer, where he worked as head of the engineering department and the Fly Brand Manager. He worked there until 2001 and along the way learned every aspect of fly rod design and manufacturing.