The story that nobody talks about

Thinking back now to Friday, working with Ear To the Ground, I cant help but wish I had said more better, or worse still, said, what I now think I have left out! Its not an easy task to follow after the producer issues you with instructions – ‘’Just look at Helen Jim and not at the camera”. Looking at Helen was the easy part, connecting my mouth to my brain remained extremely difficult at times.
It was however done in one take.
This is not, I’m afraid a good news story.
On the contrary this is a story that extends out of The Sunday Times article published about the commercial threat to bass angling as published some weeks ago. The people at Ear To The Ground felt they had something here they could cover.
My biggest fear, at the time of the initial contact with ETTG, 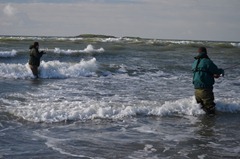 was that they would also, in the interests of fairness, be interviewing people from a sector of the commercial fishery industry who seek to re-open the fishery and exploit the species. This fear is borne out of the realisation that the supply of national airtime and promotional opportunity would be given to an industry that has already placed the species on the verge of extinction prior to 1989 and could effectively destroy the species again in a time frame of less than one summer season.

In fact re-opening the commercial bass fishery would in effect destroy much more than that.
So when I spoke to the interviewer I spoke about tackle shops, restaurants, shops, pubs, B+B’s, hotels, charter boats, fishing guides the hundreds of anglers and the integrated network of business that is developing around bass fishing in this country both from a National and an International basis. This is not a ‘Jim Hendrick’ story this is a National angling resource that belongs to everyone who wishes to use it properly and sustainably – the fishery is not held in the ownership or false stewardship of a few people who think they have a God given right to it at the expense of everyone else.
Speaking 'economically' seems to be the buzz word – to get us back to where we were before! Where were we, before, exactly? A quick hit by the commercial industry does NOT mean lots of jobs over many years it means a quick smash and grab on a species that should never be commercially exploited, a two fingered gesture to everyone who has benefited from the small recovery and also to the extended commitment of protection and promotion afforded to the species in ways that reach far beyond the economics of the situation.
Be prepared for the ‘poor us’ story as the commercial spin machine of ‘what we as fishermen are denied and entitled to whilst others get their hands on them’ ratchets into place. The sympathy vote from the public caught up in a fog of misrepresentation and pseudo heartfelt hardship – we've been here before remember, ask why have we found it necessary as a nation to protect the species in the first instance? – Simply because they were commercially fished to near extinction prior to 1989. Not managed, not sustainably exploited, with no long-term investment. Gone. And all the benefits with them.
And now 22 years later some want their hands on them again!
It wont be probassfisher who will save bass from commercial exploitation, it wont be any individual, tackle dealer, guide, journalist, organisation, blogger or angler. It needs to be all the people who have all made thousands of hours of personal input to angling in this country – not just sea anglers, but game anglers, coarse anglers, boat anglers – you in fact!
You, your club, your organisation, your angling friends, the B+B you stayed at, the tackle shop where you bought the gear, the food you ate at the restaurant you went back to, the drink you drank in the greatest pub ever, the petrol you used, the mars bar the chewing gum, the soft drink, the books you bought and read, the guide you had who showed you something simple and new or opened a whole new world, all many many valid reasons to protect the fish.
But when you sit on a cold wet Sunday afternoon in February and you remember how on that July morning at four thirty as the sun had risen to the surface smash take of a big bass and you turned to your friend who was already running towards you and you felt like the greatest angler in the world and the stress and the difficulty of living in a country where development so often means destruction - all this slipped away and was forgotten in a moment of angling pleasure that connected you to yourself in a way that you had forgotten existed a moment that you want to share and remember again and again a moment that you cant wait to attempt next season, the anticipation already beginning, to simply get out there to connect
Surely this must be the greatest reason of all to save these fish - we can never re-capitalise the benefits of our natural heritage!

If you are a journalist, an angler, a shop keeper, a tackle dealer - what can you do to help?