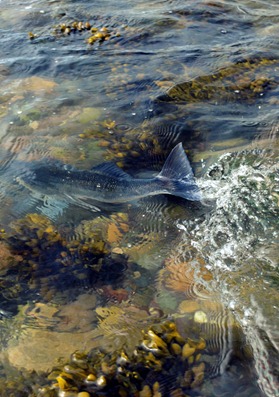 ‘In many instances, the landscape is unrivalled. The delights of late summer and autumn remain to be experienced. There is nothing like fresh air; exercise and beautiful scenery to add sweetness to life’. The Irish Times – Sat August 17, 2013.

I have just completed six days of guiding on the southern coast. It has been one of those magic weeks when a small number of things combine to make it an unforgettable experience. The weather, the company and the coastal locations where we experienced the fishing, and the fish, merged to produce a series of memories I cant help drifting back into.

Summers like this don’t come round too often and when they do they light up our lives in ways we don’t often realise. We stood many times over the past few days in awe, witnessing the coast that has not really had opportunity to shine over recent summers, and we were simply glad to be there. Many times it was less and less about the catching of fish and more and more about where the fishing had led us - to witness and to experience the unique Irish coastal landscape revealed to us in its many forms.

The sense and awareness of the many different wild places of where the fish lives adds to the intrigue and sometimes a greater understanding of the nature of the fish and the fishing. When this is shared with other people under similar circumstances, expressed, spoken about, thought about and absorbed over a pleasant pint or two of Guinness it surely produces a sense of deep satisfaction of living perhaps.