Easy to learn and quick to tie–The tying workshops I 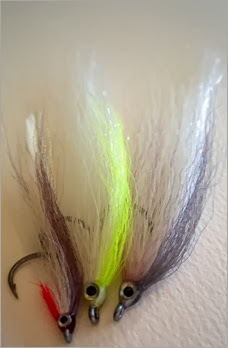 Tying saltwater flies that are easy to learn quick to tie, and probably equally as important, easy to cast and fish is what the fly tying workshops are all about during our Season 2014 primer.

Brian, during his first workshops, will take you, in is normally relaxed fashion, through the thought processes of both Lefty Kreh and Bob Popovics designs and functions especially when tying with natural materials.

Learn about sparcity, density, profile,shape and size plus on the water crossover techniques for both seatrout and bass

Because of the successes we have experienced in using both the BTD and the HF we have decided to dedicate one of your workshops almost exclusively to these two flies.

The Hollow Fleye is an expansion of Popovics’ Bucktail Deceiver. Rhode Island fly tier Kenney Abrames was impressed with the Bucktail Deceiver, and  he urged Bob to continue developing this pattern. Popovics decided to find a construction method that used less material to build a fly with a large profile.

He soon discovered a new technique that allowed him greater control over bucktail than he previously thought possible. He found that by tying the bucktail on the hook in reverse and then propping it rearward with a wall of thread, he had infinite control over the angle of the bucktail. This technique allows him to sculpt baitfish patterns using varying lengths and angles of bucktail. When tied in this manner, the cone of bucktail forms an outer layer that gives the fly its hollow appearance and name.

Watch and build with Brian as he unfolds Bob Popovics and Lefty Krehs patterns for you – all will be revealed!