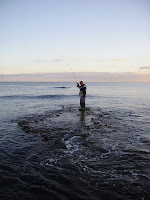 So you start the week on a Saturday morning by cleaning, polishing and hoovering the car, checking water and oil and diesel and placing some conversation pieces on the dashboard, a few flies or lures or something to spark a few words that will inevitably generate the first of many debates over the coming days. You get dressed in your best ‘guiding’ gear and of you go to the airport. This is always a strange time for me – mind games are played as you ask yourself ‘What will they look like’? ‘What will they be like to fish with?’ and then as you continue to wait for their arrival one of the party coming through recognises you with a smile that says so many things, and then the week begins. Introductions, hellos, flight ok? Hungry? No, ok, lets go to the car, it’s this way; I’m sorry what was your name again…seven days of intense focus and interaction. Its often that when the week is over I am left with a strange sense of anti-climax as I say goodbye to whom were once strangers but are now friends and close companions. Welcome to the world of the saltwater fishing guide.

It is inevitable that the customer will often not know what to expect when he arrives. He will be quite prepared to ask lots of questions, questions you will have heard before and you will provide answers that are an integral part of the service that you provide.

Questions in relation to tides and moon phases, weather conditions, temperatures and various other external influences will help you place the fisherman into a ‘category’. Other types of questions about local politics or the countryside or history will also force you to categorise the angler. Speed of questions, the number of questions, the type of questions, how the question is asked, and the often-animated conversations amongst the group in home languages before the next question follows helps you in forming and managing the customers expectations. And here we come to the greatest challenge of the next seven days – anticipating managing, and providing that expectation to the best of your abilities. Each customer’s expectation is unique and each customer is a fisherman. So when I met Steen Ulnits from Denmark at the airport in August not only had he a unique expectation, not only was he a fisherman, not only was he a fisheries biologist but as well as that he was an international fishing guide. A new challenge lay in front of me – how to successfully guide a fishing guide?

For your information Steen is a fisheries biologist by education from the University of Århus but is now a full time outdoors writer and photographer. He works for a number of magazines - mostly the Scandinavian fly only magazine "Flugfiske i Norden" where, besides being one of the founders and present co-owner, he is on the editorial staff. He also has his own angling page in "Jyllands-Posten", the largest Danish newspaper with a circulation of some 250.000 during weekends.

Being a fisheries biologist by education (and profession for some years) he has dealt a lot with environmental issues where and when they pertained to fish and water. He also specialises in fly-fishing and travel all over the world, sampling exotic fishing and thus obtaining new material for articles and books. Speaking of which he has written 20 so far - in his own name. Besides that he has translated 7 books into Danish and co-authored another 10 international books. Mmmmmmmmh……

Now here he was in Wexford looking to catch an Irish bass on the fly!

After day two of gentle fishing I felt something was wrong. So what was it? I had made two mistakes. One, I assumed that because of Steen’s vast experience and knowledge that he would know exactly what to do and how to do it, and two, I wasn’t managing his expectations based on my assumptions, and hence he wasn’t catching any fish. Simple really.

The fact was, he was not like any other customer and at the same time he was exactly the same. I had categorised him immediately as an expert who didn’t really need much interaction from me as I assumed he knew how to catch bass on the fly. Steen had had some experience of them in Denmark as they are now increasing their range into the Nordic countries. Or maybe they were already there and people just didn’t fish for them, and anyway he surely didn’t need me to show him how to catch a predator on the fly! However after four sessions Steen hadn’t hit a fish and I needed to put it right very quickly. Of course we had discussed equipment and flies and lines and fishing and tactics in detail but what had we missed?

ted floating shooting head with a ten-foot leader and a traditional lefty’s deceiver size 1/0. There was nothing spectacularly wrong there as I suspected. His casting was what I like to refer to as a relaxed style with an equally relaxed retrieve of a slow strip and stop. The thing was, as I stood and watched him on the last session of day two he was continuously casting and retrieving to the same place and retrieving at the same pace with the same fly. Nothing changed in his almost robotic and yet effective technique. I say effective in as much as the fly was presented correctly, was fished correctly but it was monotonous, too monotonous almost without confidence and with a degree of uncertainty. He needed to change and so did I.

On the third session I went into super guide mode. I didn’t care if he was a ‘world-class’ expert; from now on he was been treated as if he was a novice saltwater fly fisherman. I have as a preference started to use Varivas tapered leaders so I suggested to Steen that he do likewise. Our fly choice was my default clouser minnows in white and white and chartreuse, coupled to the same colours in a bucktail deceiver pattern that had proven successful all spring and summer long. I ensured he had sufficient supply of both types.

This session was an evening one and as the wind was north northwesterly the sky was prone to dramatic light and colour changes as had been the case for many days. Temperatures were down slightly an

d water clarity was incredible. However over the last few evenings I had noticed baitfish appearing in shoals along the coast often chased by hunting mackerel. As yet they remained out of reach of our flies. The venue was an open beach with some rocky outcrops. Recently I had picked up fish cruising along the outcrops as they hunted with the rise of the tide. Takes were fierce and often as not the fish were deep hooked so I also removed the barbs from the flies we were using.

So I positioned Steen along one of the outcrops and explained in detail some of the observations I had made over the past few weeks. I drew in the sand some of my ‘theories’ not really knowing whether they were true or not but at this stage I wanted him to have a very positive attitude and feeling of confidence. So we began to fish again – fan casting over the outcrop and…. nothing happened. I moved up the beach to explore the next set, took a lazy cast and hit a small fish of about two pounds; whilst I was landing him I noticed another bigger fish hunting through the channels of the outcrop. I walked back down the beach and spoke to Steen telling him of the fish I caught and of the possibility of him catching the one I had also seen. We attached a grey and white bucktail deceiver pattern and Steen made his first casts in the direction of the fish. He stripped the fly and bang – was on, at last! 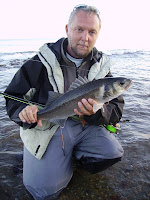 During the evening as the light continued to amaze us and the evening sun began to set we were treated to more fish. Mackerel chased sprats onto the beach and I’m sure some bass chased the mackerel too. We changed our rods to #4’s and simple silver patterns and had some real fun. Just before the light disappeared Steen had another bass on the deceiver.
It happens a lot like this. Sometimes it’s a little mysterious. I believe you can make things happen in fishing simply by talking and communicating to someone that they are doing fine and by making them feel more confident suddenly they catch fish. I felt I didn’t need to make Steen feel confident, I assumed he was more than capable and I’m sure he was. However, that extra ingredient, that last piece of the jigsaw was missing – you can never assume anything in fishing least of all that either you or someone else knows exactly what to do.
at March 17, 2008