The toughest bass fishing year yet! 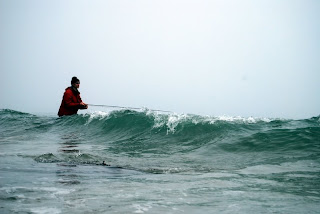 
2008 shall be remembered as a difficult year for bass fishing. Since I officially started with a full time guiding service the year produced somewhere in the region of 50% less fish than 2007, and 2007, whilst good, was down on previous returns. It was also a year where numbers were less than 50% of the five-year average. Summer catches in the estuaries and along many parts of the southeastern coast were hampered by the runoff from heavy rainfall and the constant strong wind and waves stirred up sand and mud. Water clarity was almost a constant issue right through the summer and it wasn’t until late September that some consistency was achieved. 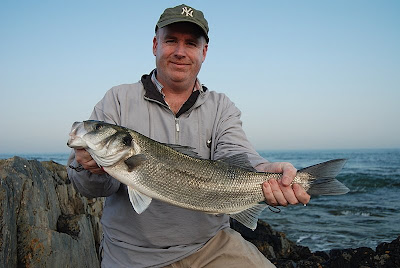 The autumn months of September, October and November produced some spectacular fishing and we were rewarded with bigger fish on the fly than I would have previously experienced. In fact the entire season produced a better quality of fish than any of the other previous four years experiences. Because of the considerable challenges we experienced, fishing was at times very difficult, and fly-fishing was often impossible or dangerous. I would like to say thank you to all the people who persevered and often got their rewards after what seemed like an impossible situation, I also apologise to those people whom I cancelled but sometimes its better and safer not to fish at all.

What is becoming apparent to me is the increasing interest in saltwater fly-fishing. Numbers of people visiting SEAi are up in the following categories

Numbers of people fishing with lures from international destinations has

decreased somewhat, this may be indicative of other aspects of the marketing strategy of SEAi. Because of the difficult and challenging nature of saltwater fly fishing for bass, and whilst there are an increasing number of people interested in this aspect of the fishing, it may also have contributed to the drop in numbers of fish returns per day during a difficult season. This is not truly reflective of the saltwater fly fishery and in fact after two consecutive years of tough fly-fishing conditions we hope that the weather will improve for 2009. 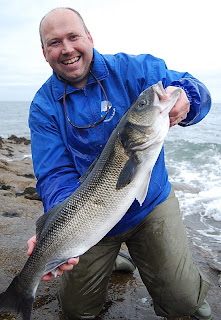 The weight distribution of fish is not available for 2003, 2004, or 2005 – I was using these periods to capture a reasonable sample of actual weight against length, very similar to the B.A.S.S. measurements/conversion table. It is available for the years 2006, '07 and '08. It must be said that that in any ‘scientific analysis’ this report would not stand up to scrutiny. Whilst numbers of fish are reasonably accurate a lot of the weight distribution numbers are based upon quick ‘visual guestimates’ of length based over hours of experience. Fish are also often measured against a rod enabling quick return/release. Bigger fish are measured using the BASS tape. Numbers available on request.

Lure fishing returns do suffer during bad we 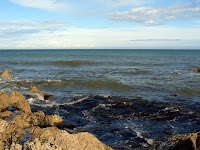 ather conditions however the impact is not as severe as that placed upon fly fishers. Over the five year reported period, numbers of lure fishing visitors has decreased. This is part of the active marketing strategy based towards a more fly-fishing oriented guiding service. As a consequence of the increase in fly fishermen there is a significant decrease in catch returns. However these numbers are influenced heavily by two very difficult summers in a row.

GEAR; I operate the guiding service on average for 10 hrs per day – over a 7 month season that can add up to a lot of hours in mny different environments. The weather this year placed untold demands on rods reels and lines but also on waders, jackets and other protective gear. I realise the average angler may not spend as much time on the water as my customers and I – but I would strongly recommend that you buy the best you can afford especially in relation to protective gear like jackets, boots and waders.

FISHING; I learned a LOT this year about bass fishing in very difficult weather, most of it in relation to fly-fishing for bass. On the south and east coast there is a multitude of variables that will influence the fish, wind, temperature, tide and rain to name only a few. Understanding and observing these influences will help you no end in your fishing. DO NOT be surprised where and when you will find fish even if the window is only very small. Yes there are some hard statistics that are always associated with the words like ‘never’ or ‘always’ or ‘must’ – I will say to you now -you find the boundaries for yourself, you will be surprised! Its not about the moon, or tide or wind, its about the amalgamation of these influences by you and then using the information tactically.

CUSTOMER CARE: Because conditions were often very difficult during the season customer care was of utmost importance. This extended from two sources that wouldnt normally be as demanding. At times with strong winds and heavy rains, fly casting was very physically and mentally demanding. Extreme care was needed. I emphasised regularly both from a stable footing point of view and the travelling fly line, that it was neccessary for me to watch the customers fly/fly line and its path during strong winds, and to be extremely vigilant of waves. The second aspect of customer care was constant communication and encouragement when things were tough as was often the case. I normally fish very little if at all (unless invited) when guiding and most of my time this year was spent demonstratng wind beating techniques while trying to fish effectively. Its very important to me that YOU catch the fish not ME!

TACTICS; Soft lures, BIG flies and sinking lines – the hot items during 2008. In muddy water wait and watch the situation develop over a tide - water tends to be a little clearer near the bottom!