Fishing Report October 07 - A Big Fish on the fly 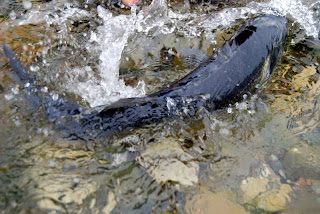 On the particular day of my catching this fish I was guiding three men from Bordeaux. I didn’t deliberately set out to catch it nor was I fishing at the time, I generally don’t fish whilst guiding. We were fly-fishing in a small estuary and had already fished through the optimum time for fish quantity. I had instructed the three guys to move towards a corner where there is a slow reverse tidal flow and it is often the last opportunity before I say the window has passed and call a halt to the session. Some fish often tend to hang here after they have spread out over the estuary with the rising tide.

I put the three guys in position and on the first cast Edouard had a little fish of about 1.5Kgs. Then after 40 minutes no more action. I always keep my own rod rigged and ready for use in case a customer has a problem with his and a quick exchange is necessary. I had my Redington #7 ready, lined with a Rio streamer tip and a Rio saltwater tapered leader. This was loaded on my Danielsson LW 6/9. No fly was attached.

I was standing behind and somewhat away (200 metres) from the three guys avoiding back casts when suddenly there was a massive surge and splash of water down to my left in a shallow section of weedy water. Then I saw the fish’s tail and dorsal fin cruising through the weed very slowly – I immediately suspected he might have been hunting for small seatrout or mullet. Dominique also saw and heard the giant splash but couldn’t identify it as a fish. He was to far away to take advantage of the opportunity as I called to him.

I immediately ran to my rod, tied on a bucktail deceiver in lavender/grey and white and walked slowly in the direction of the fish and the weed bed. I could see him clearly now as he had emerged from the weed somewhat and was cruising down the outside using the tide to push him along. I had no basket and felt that wading to him would probably spook him and so I remained on the beach at ankle depth, walked along at fish cruising speed, stripped the line to about 25 yards, hoping it wouldn’t catch in the weed during the cast. I made one false cast to get the head out then cast with a slight mend to place the fly in front of the fish and the line closer to shore. Remarkably for the circumstances the fly landed about three feet to the right and about five in front of the fish. I made one strip and stopped and figure of eighted. Then the fish took the fly. 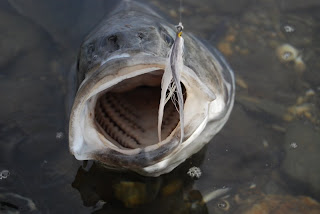 The time it took for the fish to realise it was hooked appeared to be quite considerable although it was probably only three seconds or so. The power of a big fishes tail when he swims away using the tidal flow is quite considerable. He swam towards deeper water and began using the tide running up the little estuary. It was a dogged slow and hard fight, with short powerful runs, rather than the usual more frenetic type you get from smaller more energetic fish, and in the end he gave up rather peacefully but thankfully not exhausted either. That big eye made contact of some sort, we quickly made the photographs and he slowly swam off.

I hadn't intentionally set out on this particular day to catch a big fish, but rather the opportunity was presented to me. The best tactic I can advise is try to remain calm and avoid getting flustered. Try to read the situation as quickly as possible before the opportunity passes. My big fear was spooking the fish and realising that I would probably only have a 'one shot chance' at him. The cast was VERY important and it was probably one of the best of my life so far - especially as i'm partcularly weak at 'reach casting'. I knew where I wanted to put the fly - I was conscious of the coiled line lying in the shallow water surrounded by weed, I was conscious of not lining the fish loading the rod and making a slight change of direction with a 'reach' to put the fly in a position so it would pass across in front of him rather than towards him, I was also conscious that behind me were three customers who werent really sure what was going on and were now moving in my direction - the violent nervous shaking wasnt helping either!
at October 07, 2008