When I first started guiding there was a name that was spoken with tones of reverance awe and respect. It was a name that to me sounded like somebody had fallen on the keyboard whilst spelling it - and even today at times I have to check before pronouncing it. Eric le Guyader never went to angling shows simply because, he said, '......I cannot catch bass at a show'.

A professional fisherman, working in the awesome and incredibly dangerous stretches of the Raz de Seine, to many Frenchmen he represents the ultimate predator angler. Over time I began to subconsciously place him alongside Cu Culainn in terms of myth and prowess. Then one late summer afternoon in 2004 whilst guiding somebody (who shall remain nameless) from a little boat at the back of a tidal rip I was handed a STICKER lure, hand poured and built by Eric le Guyader.

It wasnt so much that the lure provided me with a solution to catch more fish which made me feel the way I did that afternoon, but rather as if I had been handed something that had been made real from legend - like Excalibur, or one of Robin Hoods arrows or the stone that slayed Goliath. 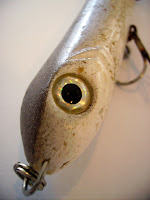 I still have it of course (ten years later) and now it sits on top of my mantle, scratched, worn, a little tired but very happy. I had some fun with that lure for many years and it is a talisman to me now. I darent fish with it too often for the simple fear of loosing it but sometimes we sneak out together and catch one or two fish -

Since that time Eric has built more of these incredible lures in many different shapes see the slideshow below. We spent some time together during a miserable few days in October talking techniques and tactics - seeing him and meeting him was even more inspiring - a gentle giant of man with the natural instinct. If you would like to know more about these lures and how they work please don’t hesitate to drop me a mail at sportfishing@eircom.net