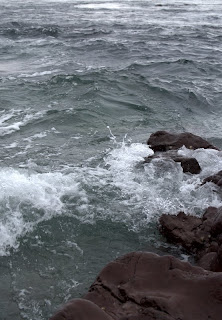 The friction of wind on the water creates the waves that we see crashing onto our shores. When and where wind and the sea meet, the energy of the moving wind is transferred into the surface of the sea. This is the reason why at sea level the strength of the wind is considerably less than say at even thirty feet; some of the wind energy is lost and captured by the sea. When a gentle breeze first starts to blow over a calm sea ripples are formed, as the wind strength may increase or continue these ripples transform into little waves and eventually into waves proper. As the side of the wave that ‘receives’ the wind is affected most by it, the wave collects more energy on one side than the other and so will tend to grow in size.

This process does not continue indefinitely however, as the wave grows in size so does its speed ‘across’ the sea increase. Its speed of movement relative to the wind speed plus the loss of energy due to motion within the wave keeps the waves at heights related to particular wind strengths whilst in open water. There is a state of equilibrium reached and unless the wind increase or decreases the waves remain at a fairly steady size.

Lets imagine waves generated by a recent force four blowing constantly for the past five or six hours in a southwesterly direction. The waves in the sequence will all look pretty similar. The wave heights will be the same – the distance from the top of the wave to the bottom of the troughs following the wave. Their wavelengths – the horizontal distance between two crests will be very similar, and the frequency at which they pass a particular point will also be the same.

What we see happening on our shore is the change in shape, appearance and activity of the wave as the depth of water changes. As soon as an ocean wave enters a water depth that is less than half its wavelength it will begin to slow down, get taller, and change shape while at the same time its frequency will remain the same. The speed of the wave entering shallow water is slowed down as it gets ‘tripped up’ by the grip of the shoreline floor. Relative to other waves, as they slow down, the wavelength decreases and as it moves into continuously shallower water it becomes more and more unstable, increasing in height until eventually falling over when it reaches a water depth that is less than 1.35 times its height. This is breaking wave action. 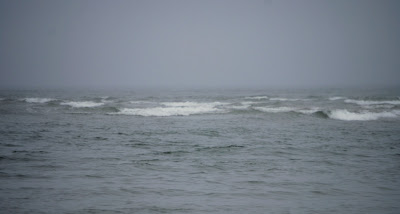 When waves pushed by the wind run against a strong tidal flow or stream, like the tide running out of an estuary, the wavelengths also become shorter, the waves more steep and higher and hence they are more liable to break. This situation can also be aggravated by uneven or shallow bottom structure – having wind-assisted waves running against the tide can create fantastic bass fishing situations. Following the breaking wave pattern as it moves may assist you in finding fish more regularly. Conversely wind blowing out of an estuary with a ebbing tide increase wavelengths and reduces wave heights but may assist in ‘emptying’ the estuary faster than normal. Adjusting your fishing times to the patterns of how different winds and tides will create different types of waves and wave breaks will see you catch more fish.