My father tells me of the times he cycled home from fishing the surf at Curracloe in Wexford. It’s a round trip of about fifteen miles but his friends and he made the return journey more difficult by having bass tied to the handlebars of their black Raleigh bikes. These weren’t small fish and often there were a lot of them, it was 1958 when bass blitzed the seas summer surface like they are supposed to, signs of a healthy population.

He has fifty two years in perspective

By the time he reached home his 'handlebar' of fish was often diminished, too tired to carry them all the way to Wexford he simply knocked on doors along the way home and gave them to people. They fished, his friends and he the way they knew how – early in the strong wind pattern - greenheart rods and fixed spool reels and lugworm cast only into the clean white surf at the Raven or at Culletons gap.
Today we overlook this great bass fishing opportunity in our quest for estuary and rock. I know the fish don’t shoal like they did in the old days but there is something special about imagining what it must have been like. Shallow sandy water presents its own tough opportunities and challenges.

When moving waves heading towards our beaches reach shallow water the friction against the sea bed causes the waves balance to become upset. Orbiting particles within the structure change and the speed of the wave decreases. Becoming steeper until the point at which they break and fall over. The total stored energy of the wave is released and most of us at some time or other have experienced that crash and boom, the power of the surf. 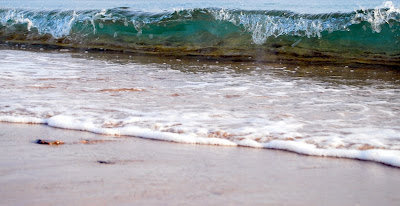 On the open sea a moving wave will often break at winds speeds of force seven or greater, this breaking water will move ahead of the wave and the energy is passed on to other passing or overtaking waves. The death of a wave occurs in shallow water when all of this aggragated energy or force is released onto the shore. This is a wave of translation.


Next - how the tides, waves and refraction, together, lead to better bass fishing at the sandy shore
at February 11, 2010