Cutting up the surface clock.

There is a technique used in fly fishing called fan casting. Imagine you are standing at the waters edge and rather than making your first casts straight out in front of you and then retrieving back, you make a short cast almost parallel to the shore line to your right hand side and then retrieve. Lets call this the three o clock position, you then cast again to your right to the same distance but at an earlier position on the clock face - some what before the imaginary little hand is on three. You continue in this fashion from right to left past two o clock, past one and twelve which is straight in front of you and continue across to your left, past eleven and ten to nine o clock, always at the same distance. 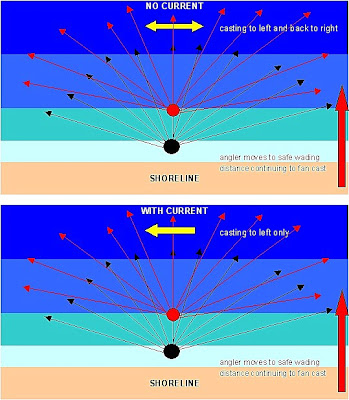 Where there is no current running you could begin to cast again at nine and at a slightly greater distance and work your way back to three and then back again to nine, again at an increased distance - slowly working you casting from right to left and left to right further out to sea with each pass. If there is current on your location lets say flowing from right to left I find that generally fish point into the current if holding, so casting from nine back to three is often less effective.

This technique allows you to cover all of your fishing ground in front without going into the water, to a range of say 30 metres. The next phase involves you stepping into the water away from the shore line for about two metres and beginning to fan cast again, right to left, wade a little, then fan cast right to left and continue until you reach a safe wading limit. If you have done this slowly and carefully a cast behind you is often worth a try. Return to shore, have a sit down and then move down the location a little and begin again.

So how do I apply this to my lure fishing? Of course casting with a lure is considerably easier but that doesnt mean you should be less patient or less careful. Simply flipping your first casts to thirty metres along the shore and working out and around in the fan cast fashion works equally as well from a lure perspective. In fact you may be suprised to learn where fish lie, and covering them like this gives you the opportunity to find them without spooking them off.

NEXT - Tidal timings and our presentations
at January 21, 2009