What time are the fish? 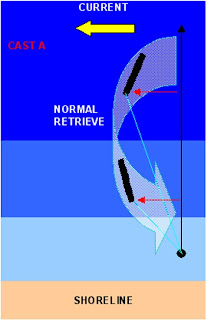 In the diagram to the right the anglers cast is made perpendicular to the beach. There is a current flowing from right to left and in the next three diagrams lets assume the current flow and speed remains constant. The anglers lure is represented by the small black oblong shape and the path of the lure is indicated by the large blue arrow. This is the path the lure will take with a constant normal retrieve. The important thing to remember in this situation is the diection and motion the head of the lure is taking - take a look at the red arrow. This is CAST A. 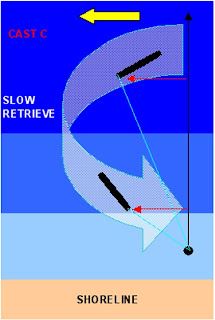 In the next Diagram or CAST C all things remain the same
except the speed of retrieve the angler imparts on his lure. In this instance the speed of retrieve is slowed down and the path that the lure takes is much wider. Take a look at the red arrow in this instance and the difference is clear. The head of the lure is travelling in a different and wider presentation. This is CAST C. 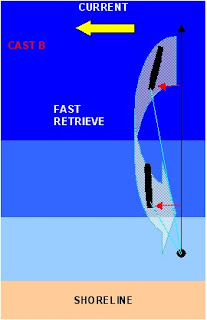 In this last diagram again the current remains constant, but this time the angler increases the speed of his retrieve - the presentation is different as the head of the lure travels differently and the path taken is much tighter to the perpendicular. This is CAST B. Simply by varying the speed of the retrieve you can make three simple but very different presentations. Not only is your lure swimming differently but its sound will also be different. In this simple situation all things remain constant but in reality its not that simple. As tides rise and fall so the speed at which they run and flow increases and decreases, the direction in which they flow changes over many hours, the type of surface wave activity changes constantly as it interacts with local wind speed, direction, barometic pressure and even the type of ground which the water is running over.

If we were to take CAST A over a normal tide rise and fall where the angler doesn't vary his retrieve but we applied local tide flow, the path of the lure would be different at different times during the tide.

The following rule may help you determine maximum flow of water over any time of tide at a location during that tide. Fish activity and especially that of bass will coincide with this water flow at different intervals .

In the first hour of the tide 1/12th of the total tide or water would move.
In the second hour 2/12ths of the water moves.
In the third hour 3/12ths have moved.
So after the first three hours a total of 6/12ths of the tide has moved. For the remaining half of the tide the system works in reverse -
during the fourth hour another 3/12th of the water moves
in the fifth hour 2/12ths
and in the last hour 1/12th moves.
During Spring and Neap tides this volume can be greater or smaller, speeds are reduced or increased, and ranges are wider or narrower.

It is interesting to note that at the end of the fourth hour 3/4s of the TOTAL tide has pushed through. How does this affect our virtual angler who hasnt changed his speed of retrieve?

Understanding how our target species behaves in this sequence is a vital part of your success and this is based around how their prey behaves, swims, hides, feeds, moves around and generally behaves in the tidal sequences, flow and movement of water. Vary your retrieves and presentations to match that of prey rather than simply pulling lures through or across the water. In other words small fish like gobies in some locations might be active in the first two hours and the last two hours of tide - during the rush hour they seek cover from strong currents. Thats two different presentations you will need to make.