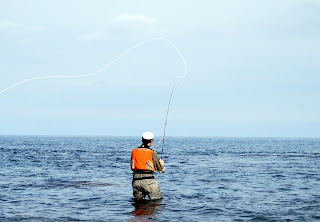 ‘One last cast’, I cried across to my friend. We had been fly fishing for three hours and things were beginning to wear a little thin, it was now much later than we would normally stay in the tide, three hours of intensive fishing and we had nothing to show. During the previous evening we had made the following agreement for the next days tactics. We would only fly fish; we would fish barbless hooks, we would not bring any lure fishing equipment with us, and we would catch whatever tide was necessary and travel to the remotest venues!

Previous experience had thought me that at some localities fish only feed at specific moments during the tide, I knew that this locality was one of those areas and we were now way passed the optimum time. Hence my call for one last cast. Stripping back the fly for the last time, I picked some seaweed of the line, hooked the fly in the keeper ring and head down I slowly made my way back towards base camp. Defeated. My friend stayed on for a few more casts then he too repeated the procedure. 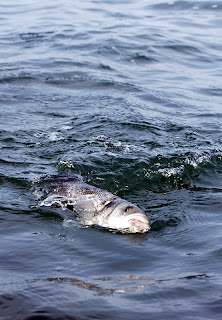 Pouring coffee and opening some biscuits and cakes I remained slightly dumbstruck at the fact that we had caught nothing. Both of us quietly ate our cakes and drank our coffee not saying much but absorbing our surroundings in a way that is often difficult to do when you are fishing intently. The odd comment was passed about the peace, the colours and the sheer beauty of nature. We both avoided the obvious for the moment and rested for some twenty minutes or more. Sometimes during these silences two things will happen, one – I will begin to feel intensely uncomfortable and loose some faith in my abilities as an angler and return home to prepare for the next tie I go fishing, or two- there is a passive recharging of some inner battery, and some times an unspoken communication with my friend or even someties a client which will often lead to both of us standing up at the same time to continue fishing.

Now at this venue, to do this, was, for me very unusual. Many times I had fished and re-fished over various tides and times and weather conditions to establish some patterns. Thousands of hours spent casting different flies and lures in different ways at different times had lead me to believe that we would not fair any better than we had before. I have a habit of changing my leader and tippet after every session and when I was doing this over my coffee I also attached my favourite all round bass fly, the white deceiver. Above the deceiver on a dropper I attached a much smaller baitfish type pattern and so was fishing what I call a ‘chase team’. This often works when fish are well fed and it will often induce a response that provo

kes a take on the smaller fly. I advised my friend or rather he suggested to me that he try on the surface with a brightly coloured popper fly. I agreed and said that we should fish closer together to cover the layers more effectively. Fishing a popper fly and a deceiver as a team will often bring fish to the person on the deceiver!

During the next forty minutes or so I began to believe that things were just as I believed they would be when there was a loud surface splash followed by a shout from my right as I watched John hook into a plump bass of about two pounds. His rod arched over into a pleasing, powerful fish. I retrieved and cast in his direction and suddenly both of us were into fish! We fished for another hour until the action slowed and eventually stopped. I caught three fish the other guy had four, we kept one to eat the rest were returned alive to the water fit and well. Now where is this leading to you might well ask?

Firstly – you don’t always have everything figured out! Just because it doesn’t look or feel right to you doesn’t mean it’s not right for the fish or indeed if you think it is right it doesn’t necessarily mean it is. I have often heard it said that ‘you need to think like a fish’. Sometimes I find it hard to think like a human never mind a fish. The general influences in a fish’s life are tide, temperature, and time of year. Coupled to this is a natural instinct for survival, reproduction and opportunism regarding availability of food. Clever uses of these factors will more than often lead you to success, there are times when none of it makes any sense at all.

One thing I am sure of – hard work will produce results, it’s a question of try and try again. 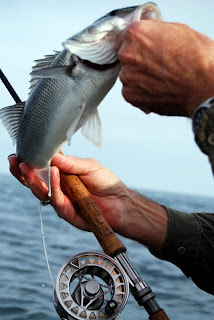 nd you are bound to increase your chances at least twofold. If I was lost on a desert island and presented with a choice of bass saltwater fly patterns I think there are only a few I would choose. Firstly the all white deceiver with a little flash would be my number one choice, this and patterns like it have caught me the most fish. The second choice would be similar with the exception of adding some olive/chartreuse/lavender and a maybe a bit bigger than the previous pattern, and my third fly would definitely be a small surface popper (just for excitement).

It is interesting to note that this summer I have fished some combinations or teams of flies and indeed lures that have helped increase the number of fish caught. A combination of two poppers one bigger than the other is very exciting even if a little difficult to fish with. Deceivers or sand eel patterns of different sizes fished in teams also present plenty of opportunities with ‘induced’ take more often on the smaller fly. The right choice and combination can often be critical so can sticking at it when you believe all is lost!
at April 29, 2009